Joseph Smith: A Prophet of the Living God 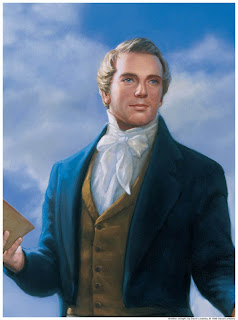 In the early years of the 1800's, in America, there was a religious excitement that swept the east coast. America just becoming a free nation and with that, the ability to have religious freedom coming from under the rule of England it was no longer in the drudgery of the Church of England, which some still kept their faith in. However this sparked a religious movement that would change the world forever. In this there was churches springing up and trying their best to persuade the people in the area to side with them and become members of their church. In spite of this all good feelings that one sect of religion may have had for another seemed to be entirely lost over this battle of allegiance's. Joseph Smith being at the age of fourteen was concerned for the welfare of his soul and desired to be saved in the kingdom of God. In Ephesians 4:5 it says that there is only, "One Lord, one faith, one baptism." From this we know that there is only one true church one true faith, One True and Living God. He was reading in James and came across this scripture in James 1:5, "If any of you lack wisdom, let him ask of God, that giveth to all men liberally, and upbraideth not; and it shall be given him." Basically saying that if anyone would like an answer from God concerning a question they have, He will answer them. This goes along with what the Master said, "Ask and ye shall receive..." Joseph Smith decided he must do as James directed or remain in darkness and confusion. 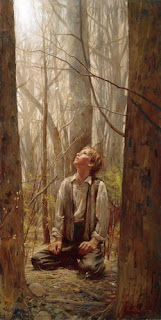 So in the early springtime of 1820 Joseph Smith resigned to a nearby woods that he had previously chose to pray. He kneeled down and began to offer up the desires of his heart when in his own words he says, "I saw a pillar of light exactly over my head, above the brightness of the sun, which descended gradually until it fell upon me...  When the light rested upon me I saw two Personages, whose brightness and glory defy all description, standing above me in the air. One of them spake unto me, calling me by name and said, pointing to the other—This is My Beloved Son. Hear Him!" In this vision Joseph Smith saw God and Jesus Christ. He asked them which of the churches established was Their church. Christ answered and said that he should not join any of them, for they were all wrong." He said all their creeds were an abomination in His sight; that those professor's were all corrupt; that: "they draw near to me with their lips, but their hearts are far from me, they teach for doctrines the commandments of men, having a form of godliness, but they deny the power thereof."