The Book of Mormon: The Keystone of Our Religion

I've heard the Book of Mormon explained this way and I know it is absolutely correct. The Book of Mormon is similar to a keystone, if you are unfamiliar with a keystone, when a stone arch is made the very center top stone in it is called the keystone. The stone if removed would bring all the other stones crashing down. 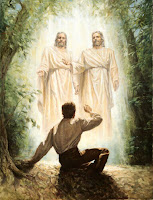 I testify that the Book of Mormon is true and that it is God's word. I know that Jesus Christ is my Savior and Redeemer. I know that that Jesus Christ of whom it testifies is the Christ, the Anointed One, the One Who is the Author and Finisher of our Salvation, the Living Son of the Living God. I know that Joseph Smith was visited by that same Father and that same Son in the early spring-time of 1820 and that he was a prophet and was called of God just like every prophet before.This is why we take the Book of Mormon to the world as another testament that Jesus is the Christ and that God has spoken again today and that there are prophets today just as in days of old. My hope in blogging about this is to bring a greater understanding of what it means if the Book of Mormon is true. God bless you all.
Posted by Kheldon Sherwood at 10:24 AM