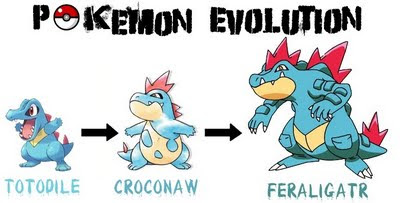 So you are probably wondering by now why there is a picture of the Big Jaw Pokémon, Feraligatr, with his previous evolutions? Well, sit tight and let me answer it for you. The process of evolution in Pokémon is quite amazing. Generally the more something is beat up and beat down, the weaker and weaker it gets until it is completely and entirely destroyed, but with Pokémon this is not the case. The more battles you go through and the more your Pokémon fight, the stronger they actually get until they finally proceed to have a metamorphic change (they evolve). They then permanently get stronger and more capable of enduring battles and pummeling foes, and in the case of Feraligatr he will completely rock your world. So now you are thinking, "Oh, okay! I bet I know where he is going with this blog! The more challenges we go through the stronger we get!" Wrongo bongo.

So how else could this possibly tie into our lives? Especially with religion? Let's step back and calibrate or readjust our view of "Christianity". In today’s world Christianity is no longer a religion. It is no longer the truth or the way of life. It is no longer a belief that changes lives. Instead it is looked at by many of every faith as a social club or a convenient life-style that doesn't impose on our personal life. It is viewed as something to be put aside if "more" important things come up. This is NOT what the Savior Jesus Christ taught. Christ didn't say, "Hey, I hope I'm not an inconvenience in your life. But, if I am just go on doing your own thing and I'll save you anyway."

No He specifically said, “So likewise, whosoever he be of you that forsaketh not all that he hath, he cannot be my disciple." (Luke 14:33) This is clearly the opposite of what people believe and teach now. Christ doesn't want us to give most of what we have or are to Him, HE WANTS IT ALL! How can we honestly believe or even suggest that "believing" is all that Christ has asked us to do. The scriptures, especially those like the above referenced, say we HAVE to be willing to give all to be with Him in heaven.

Now I will tie that back into the evolution of Pokémon. Christianity is being attacked. It is being changed within itself into something that is exactly opposite of what the Savior taught. Eventually it will appear to be drawing to its end and then... the “evolution” will occur. Our Savior will come. He will purge out those so called "Christians" whose mouths draw near to Him, but whose hearts are far from Him. We will all come to know at that point exactly what "True Christianity" is. 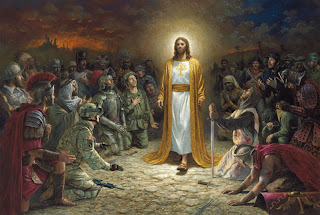 Posted by Kheldon Sherwood at 9:27 AM